Headed to a meeting on a summer day, I found myself driving into some interesting weather. At a stoplight I quickly snapped this picture And yes, I know that phones and driving don’t mix.  The cloud formations proved too difficult to resist. Upon arriving at the meeting I ran without a needed umbrella or raincoat to a nearby door. The door was locked. By the time I found an open one, I was drenched. A kindly person told me I had the wrong address. Deciding that the weather and the meeting would continue with and/or without me, I called a colleague I knew was attending, sent my regrets and went on to the next to-do in my day.

A relative told me I was driving into a storm front. Googling images of storm fronts I found numerous images. Mine was not unlike those that turned up in the Google search. 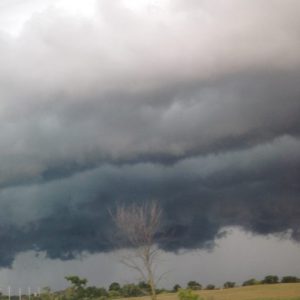 Thinking about the image and the experience drew my attention to change. The clouds take on this appearance when two fronts collide. A cold weather and a warm weather front might cause this. When I’d left the house, it had been sunny and warm. The forecast had predicted rain, but later in the day. I thought I was prepared. Things change.

Change is often comes on suddenly. While some changes can be planned for; a new job, a new baby, a vacation come to mind, many changes come upon us seemingly without warning. As a creature of habit I know I resist. There are schedules and commitments to keep. My reactions to change are not always pleasing to me or I’m sure to others. When lane closures on the road (and on my metaphorical journey) cause me to be late or delay my plans I am too often and too easily frustrated. I get angry, which is often an indicator that I’m not recognizing my feelings of disappointment or failure, whether real or imagined. These feelings also bubble up when I feel ill prepared, lacking in confidence, and fearful.

Going forward I hope I can, even if only at a stoplight moment, pause and see the beauty in the impending change planned or spontaneous. I’d like to witness and be present to change without going to a worst case scenario, remembering that life happens and as I’ve told my family, “this or something better” when plans go awry, will serve me and those I love. Although they appear ominous, the clouds that day ultimately ushered in a cool spell. Whatever the weather, may dark clouds bring the proverbial silver linings. May I stop and notice those moments, too.

Wordsmithing Magic from the Crossroads

O, thou art fairer than the evening air, clad in the beauty of a thousand stars. And also Tarot.