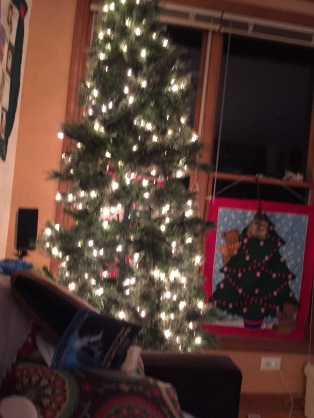 Instead of doing what I “should” be doing, (as a little voice reminds me of the saying, “don’t should on me”) I went to the Daily Post looking for Inspiration.  It instructed me  as follows, “Tell us about a sensation — a taste, a smell, a piece of music — that transports you back to childhood.”  I used to wonder about my father, who says he remembers little of his childhood.  I’d plead for stories about when he was younger, and received some from my Uncle, but not much of anything from my father.  Now, I understand this better because I do not have an abundance of childhood memories. Many of my more profound memories, of music, sights and sounds, come from teenage years.

Now that I’ve said that, I do have memories of  my parents driving my brother and me around at Christmas time to look at the different neighborhoods and see how families decorated. The colors were vivid, the mood was festive and the excitement and anticipation were palpable to me as we drove. Even in the dark, there were these tiny beacons that stood up to what as a child was a sense of foreboding, especially when things are cold and dark.  One house was prettier than the next. If the moon was out, so much the better. The lights mirrored the night sky. The dark and light, reflecting back to us the things we prize about our lives, each a little twinkle that can shine or be snuffed out by the things we do that we would rather bury in the dark. I’m sure my parents had no idea the lasting effects these annual drives, from my earliest memories have informed my life, my livelihood and existence.

My Grandmother, divorced from her Catholic roots, (She loved to tell the story of coming home from parochial school and telling her father that if the Nuns hit her one more time she would quit school.- They did and she did, going to work as a waitress at a very young age.) did not celebrate holidays, except Thanksgiving with much fanfare.  But she would string tiny white lights across the living room, and if she decided to have one, the tree.

Religion was complicated in my growing up family, but the sense of wonder, awe and mystery heralded by the lights is something that still excites and is rarely tiresome. I decorate our house with outside lights most of the year.  It is a calling of some sort. I imagine it is the power of the tradition, as well as the symbolism of light that invoke this need I have to light the darkness.

I light it because in my heart I am preserving that sense of wonder, giving it honor and connection. It is about entering into mystery and ritual and creation through the beauty of the lights.  It is a continuation of the ritual. It is hope that was kindled in the lights of my childhood and the affirmation that even when the way appears lost, there is a light somewhere, leading me on.

Wordsmithing Magic from the Crossroads

O, thou art fairer than the evening air, clad in the beauty of a thousand stars. And also Tarot.